PARENTS – BE ON THE ALERT!
CHECK OUT WHAT YOUR TEENAGERS ARE LISTENING TO AND WATCHING!

One of the new hot sensations among teens and pre-teens is a 17 year old by the name of Billie Eilish.

Link to her web site: https://www.billieeilish.com/.Did you notice how on the home page of her site she look like she is possessed ====>

Parents – be monitoring what your children and teens are listening to, and counsel them. God’s word tells us to “guard our hearts”, and not to fellowship with the works of darkness. And to perfectly honest, if you listen to this Billie Eilish’s music, and watch her videos, they are testimonies to the works of darkness!

Take for example her song “All the good girls go to hell”. Here is a link to the lyrics:  https://www.metrolyrics.com/all-the-good-girls-go-to-hell-lyrics-billie-eilish.html.  Here are the actual lyrics your teen are listening to, and the meaning behind the words:

Here is the music video link, which is unbelievable!  https://youtu.be/-PZsSWwc9xA

“My Lucifer is lonely

In the opening line above, she is claiming that “Lucifer” (the devil) is hers.  She is identifying herself with him.

Standing there, killing time
Can’t commit to anything but a crime
Peter’s on vacation, an open invitation
Animals, evidence
Pearly gates look more like a picket fence
Once you get inside ’em
Got friends but can’t invite them

People who give themselves over to the enemy “can’t commit to anything” – they lack purpose, and direction to their life.  That is the way the enemy wants it – be lost, stay lost.  Don’t make good use of the time God has given to you.  Don’t fulfill God’s purpose for your life!

Want to commit to something – then let it be a “crime”!

The she refers to “Peter” being “on vacation”, who I take to mean St, Peter.  This is an observation that our Western civilization has entered what some call the “Post-Christian” era (ie., St. Peter is on vacation).  People is the USA, Europe, and most developed countries are becoming increasing secular – holding to a materialist worldview, and denying the Creator.  This she observed is an “open invitation” to the devil to come on in and start preying on people – which he and the people who follow him are doing.

The fact that the Post Christian society considers us all on the same level of “animals” (products of unguided, mindless change evolution), she cites as “evidence” that Peter’s on vacation.

Next she mocks heaven’s gates.

The devil doesn’t care for anything or anyone but himself.  If you should burn, tough – he’ll “ignore ya”.  God the Lord, however, care for everyone one of His creatures, and will eventually redeem His Creation!

This is another lie, as usual from the enemies and his pawns.  The Bible says “Woe unto those who call “good” evil and evil “good”.  Good girls are follows of the Lord Jesus Christ, and their actions match their faith.  And they have turned over their lives to Christ, who is greater than all. Good is still good, and evil is still evil.  No matter what the enemy or modern music pushes.

Another reference to “the devil”, claiming that when things get tough, and society has fallen so badly away from the faith (“heaven’s out of sight”), she’ll want to side with the devil.)

>> Again, claiming allegiance to Lucifer.  And in a strange twist, the singer is claiming that she is “saving” creatures – when in effect her goal is to damn them!

Other titles by Billie Eisish include:

“You Should See Me in a Crown” – read the lyrics at https://www.metrolyrics.com/you-should-see-me-in-a-crown-lyrics-billie-eilish.html

“Wish You Were Gay”

Billie Eilish, as of September 2019, is among the “Top 25” Pop Artists listened to by our youth! She is touring the globe, selling millions of records, and streaming her music to our youth via YouTube.  Your children may be taking all of this garbage in, and if they are, it will affect them.

Talk to Your Children About This.

Warn them not to listen to this garbage.  Instead, encourage them to listen to good, uplifting Christian music.  There is plenty to choose from, and so play this around your home, let them fill their minds and hearts with uplifting music! 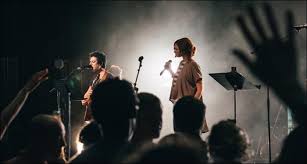 Fight the good fight parents. We are in a spiritual WAR!.

The Bible warns “We wrestle not against flesh and blood, but against principalities and powers in high places.”

Bring the adversary down in the name of Jesus Christ, who rose from the dead and is coming very soon to claim the earth once again!