Recently, an Italian professor has claimed to have reproduced the famous Shroud of Turin – the alleged burial cloth of Jesus of Nazareth.  Here is a link to the CNN article: http://www.cnn.com/2009/WORLD/europe/10/07/italy.turin.shroud/index.html

It is interesting to note that this “claim” comes out in the media just a few months prior to scheduled showing of the Shroud of Turin in Italy.  Gee – what a coincidence.  Since the media has mad such a big splash of this person’s claim, I though I would gather here a few responses to his alleged “reproduction”.  I think after you read these analyses, you will see right through this sham – and how this so-called reproduction is nothing like the real Shroud of Turin.

Reviews of the Italian Fake Shroud

Petrus Soons, a very gifted shroud scholar, has commented on the the Italian Fake. It is thoughtfully presented and warrants full consideration:

In the last few days, a story appeared in the mass media that an Italian professor of chemistry at the University of Pavia (Italy), reproduced the image on the Shroud of Turin using materials and methods that were available in the 14th century, concluding that the experiment proves the relic was man-made.

The final goal was to show that it was possible to create a fake in the 14th century.

Compare the photo above (the “reproduction”), to the actual face on the Shroud of Turin at 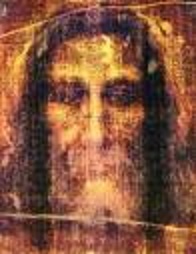 I don’t know about you, but the fake above even looks like a fake.

Now, there is nothing new to this. In 1979, Walter C. McCrone (1916-2002), an internationally recognized microscopist and the director of the famous McCrone Associates Research Laboratory in Chicago, reported that the Shroud image was due to the application of RED OCHRE, also known as Venetian red (an earth color) a red artist’s pigment, which is a red IRON OXIDE, so probably Prof Garlaschelli took over this idea from Walter C. McCrone.

This theory was already disproved by the scientific STURP team (and others in the years after that) that conducted the investigations in 1978 on the Shroud of Turin.

The earth pigment, RED OCHRE (Venetian red), from either medieval or older sources that were being used, was contaminated with manganese, nickel or cobalt GREATER THAN 1 PERCENT!!!

Prof Garlaschelli told Republica he didn’t think his research would convince those who have faith in the Shroud’s authenticity. ” They won’t give up,” he said. Those who believe in it will continue to believe.”

Well, the reason why serious scientists do not believe Prof Garlaschelli’s work has been explained.

Prof Garlaschelli explains the absence of any traces of iron oxide on the original Shroud by stating that the pigment on the original Shroud faded away naturally over the centuries. This is not a statement that you would expect from a serious scientist. The spectroscopic investigations being done in 1978 would even show the slightest traces of iron oxide present on the Shroud and it is a little bit “unscientific” to state that they disappeared “naturally.”

Another little detail is the fact that on the original Shroud there is no image under the bloodstains, proving the fact that there were two image formation processes. Direct contact for the blood proper and another image formation process for the image itself. Prof Garlaschelli added the “blood” (liquid tempera) later on top of the image that he had created. Under Ultra Violet fluorescence photography (not known of course in the 14th century), the blood on the Shroud shows a serum separation, visible as a lighter ring around a darker center, which is typical of post mortem wound exudate. This is not visible with the naked eye. The proposed artist from the 14th century could of course not have known this fact, so he could not create it either.

“I was away from my office and in Los Angeles yesterday when the story broke in the media that an Italian professor had “reproduced” the Shroud using techniques that were available in the 14th century. Although I didn’t have my computer with me, my mobile phone rang again and again with friends calling to read me the story, so I heard the news almost immediately.

Upon my return late last night, my mailbox was flooded with e-mail, my answering machine was nearly full of messages and more than 20,000 people had visited the website since Tuesday morning. I finally was able to read the story myself at around 1:00 am.

Normally, I don’t respond to this type of story, since the media rarely publishes the rebuttals anyway and the stories usually disappear by themselves after only a few days. In the end, giving it any attention at all usually only helps the author of the article and garners even more publicity for him because someone is publicly disagreeing with him. However, since so many viewers have written me, I decided to write this brief response in which I am expressing my own personal opinions on this topic. That is why I titled it an “Editorial” Response.

Frankly, knowing that the Shroud will go on public display again in around 6 months, I am not very surprised to see this type of story coming out, along with its resulting media coverage. This seems to happen every time the Shroud is about to go on public display. Yet whenever a serious scientific article about the Shroud is published in a peer reviewed journal, there is barely a ripple in the popular media. And now, once again, someone claims to have “reproduced” the Shroud, “proving” it is a medieval forgery. They made their claims via nothing more than a press release and got instant global media coverage. However, that is NOT the way science actually operates.

The author who made these claims states that he will make the details available “next week.” In the real world of science, a researcher must perform his experiments, compile his data, draw his conclusions, write a formal paper and submit it to a scientific journal for peer review. The work is then examined by other experts, usually of the same discipline, before it is accepted for publication (or rejected). The data must provide a sound basis for the claims and be there from the beginning. Not “next week.” And certainly not made public via a press release!

Sadly, in reviewing the article, it is apparent immediately that the author knows very little about the actual Shroud of Turin. He is not the first to suggest that the Shroud image was produced by red ochre pigment (iron oxide). In fact, he is at least the fourth to have proposed this theory in the last 30 years. Of course, this issue was anticipated by the STURP team in 1978 and a number of highly sensitive tests were performed that determined there was not enough iron oxide on the Shroud to be visible without a microscope. Iron oxide does not constitute the image on the Shroud. They also determined the image areas of the Shroud contain no more iron oxide than the non-image areas. It is more or less evenly distributed across the entire cloth.

Obviously, if the image were made in the manner detailed in the article, we would still find thousands of particles of iron oxide embedded into the image fibers of the linen and these would be clearly visible with just a good magnifying glass. Yet the microscopy done directly on the Shroud in 1978 revealed no such thing. These particles just don’t go away on their own. STURP’s instruments could detect parts per billion (a very small amount) of any substance on the Shroud and ALL known paints and pigments (including iron oxide) were excluded by the data. Interestingly, iron oxide is also a by-product of retting linen and the minute quantities found on the Shroud were pure and most likely the result of the retting process. The iron oxide used in red ochre pigment has many impurities and is rarely if ever found in its pure form.

I have stated on more than one occasion that making images on linen is relatively easy. However, making images on linen with the same chemical and physical properties as the Shroud is another story. Considering the massive amount of scientific data that now exists about the Shroud of Turin, anyone making claims such as these must submit their work for careful scrutiny and comparative analysis before drawing such dramatic conclusions. That has not been done in this case. Anyone making such claims must create an image with ALL the same chemical and physical properties as the Shroud, not just a few, if they wish to be taken seriously.

However, to make this new “reproduction,” the “blood” was added (using a different pigment) AFTER the image was created. Obviously, it is much easier to add the blood to the image than to first create the blood stains and then create the forensically accurate image around them, which is exactly what a medieval forger would have had to do to duplicate the actual physical properties of the Shroud!

Many of the bloodstains on the Shroud show a surrounding halo of serum stains that are ONLY visible with UV fluorescence photography. Also, the blood has been chemically analyzed and determined to include components of actual blood, NOT pigment.

A proper, detailed scientific response to this press release is now being drafted by the online Shroud Science Group and I hope to publish an in-depth article by true Shroud experts addressing these claims in the near future.

However, I would be remiss if I did not mention that the press release also stated the researcher “received funding for his work by an Italian association of atheists and agnostics but said it had no effect on his results.” This is an interesting statement from someone representing a segment of the skeptical community that has frequently charged the STURP scientists with religious bias, implying that their data was somehow flawed because some of them happened to be Christians! Until such time that the data is made available so it can be properly examined and compared to the known data about the Shroud, I will not take these claims very seriously. And neither should you.”

Italian Fake Shroud Not “Encoded” Like the Real Shroud

It was widely reported in the media that the Italian Fake exhibited the same 3D aspects as the Shroud of Turin. You decide. Hint, the Italian fake is on the left. Find the nose. Parts of both cheeks protrude higher than the nose. It is hard to see that here but it has been confirmed with grayscale density measurement.

Of course, it could not have the subtle grayscale, given the method with which it was made. And if you are familiar with height-fields as used in computer graphics, you quickly realize it can not produce anything like the shroud image. 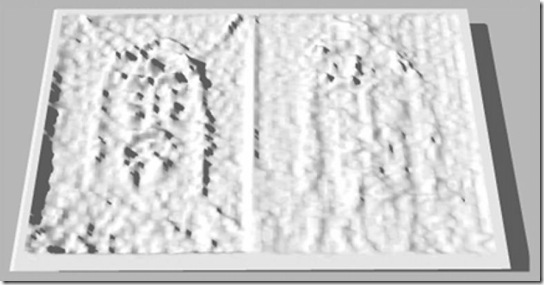 The press merely reported what Dr. Garlaschelli said without, it seems, taking a look.

These images are courtesy of Prof. Giulio Fanti at the University of Padua.

A Reproduction? We Hardly Think So

From http://www.vaticancatholic.com A refutation of the recent news that the miraculous Shroud of Turin has been reproduced and has thus been proven to be a fake. Some facts and considerations which show that the news reports are false, misleading and more. Please spread this video to all concerned about this issue. Watch the video to learn more: